I hope you are all having a fabulous long weekend!  We stayed out at a friends house until after 2am last night playing games.  We’re huge fans of Ticket to Ride (if you haven’t played it, you should), but the normal version was getting a little dull.  So we invented our own transcontinental version using two game boards, an expansion pack and a bunch of made up rules.  It’s pretty awesome 🙂

But anyway, the seasons of SYTYC always go by so fast donâ€™t they?  I canâ€™t believe weâ€™ve already been through the 9 weeks of the challenge and weâ€™re down to the final two!

This week the challenge isnâ€™t anonymous.  I figure you have already figured out who is who by now so there isnâ€™t much point in not telling you anymore

Like always the poll will be open until Friday.  Make sure you vote early and let others know they need to head on over, too! 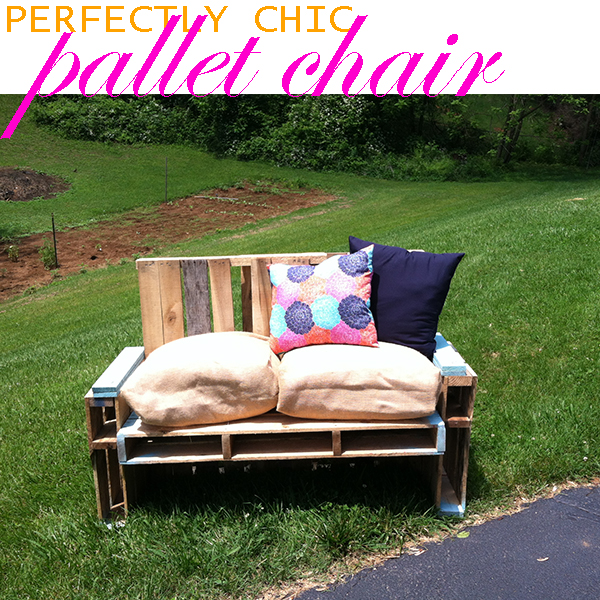 A couple weeks ago I was volunteering with the food bank for the letter carrier food drive and I saw pallets, pallets, and more pallets. So that got me to thinking… What could I make out of pallets to enter in the final week of SYTYC Season 15? “A chair! It’s perfect.” (By the way I’m really excited and blessed to have made it this far in the contest! Thanks to all of you who have voted for me and made this possible!)  With the 2 pallets the post office gave me, some extra wood I had at home, and some bots and screws from the store, I built this awesome chair. 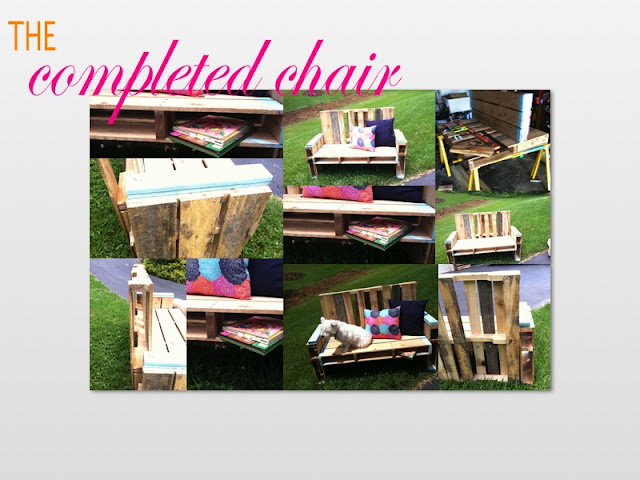 I used one pallet for the back of the chair which went all the way to the ground for extra support. The other pallet was split in half to make the seat and the legs/arm rests. The half for the legs was split again to make 2 legs. I used screws, washers, and bolts to fasten the legs, back, and seat together. 2 boards were attached to the top of the arm rests for extra height. These were also spay painted aqua blue for a splash of color. This splash of color was added in other places as well such as the edges of the seat and the bottoms of the legs. The hollow part of the seat was conveniently turned into a book self or a shelf for anything else I might want to set there. 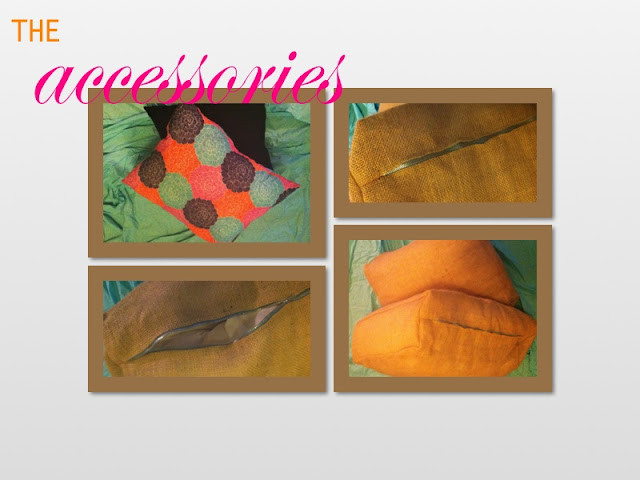 What chair could be declared finished until you add the accessories? So I bought some huge pillows at the store and some fancy fabric to get started. I sewed burlap cushion covers for the pillows I bought. Since I included a fancy little blue zipper, the pillows can be removed and washed when needed. To add contrasting color I sewed 2 accessory pillows. One is navy blue and the other is a pretty floral pattern. This chair will be envied by all those in my neighborhood when they drive and see it sitting on my front porch!

Craft #2 – New Digs for the Drive In – Heidi @ greendoodle

Summer is here and it is time to PLAY!  One of our favorite summertime treats is a double feature at the drive in.
(We put the kids to sleep for the second movie and call it a date.) 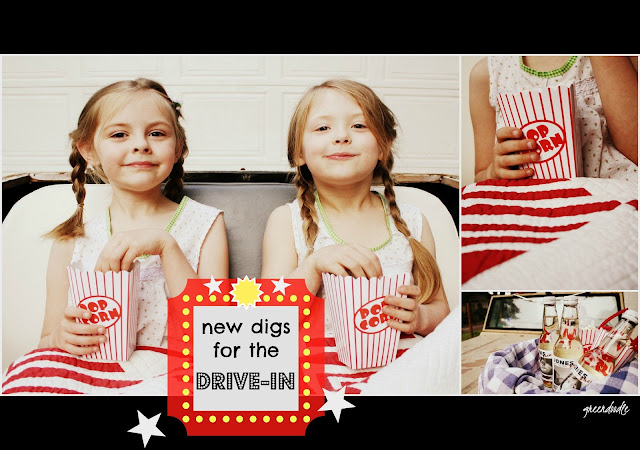 I had begun to work on a safe & “cute” final project for this contest when my husband mentioned casually…
Husband:  ” you know how I’ve been soo supportive of this competition?  And, you remember how I never said anything when we’d have cereal for dinner, or that we quadrupled the fabric budget, or that week you lost our kids?
Me:  “yeah?”
Husband:  “well, whacha think of reupholstering the Scout we just bought?
Me:  “oh boy, here we go…” 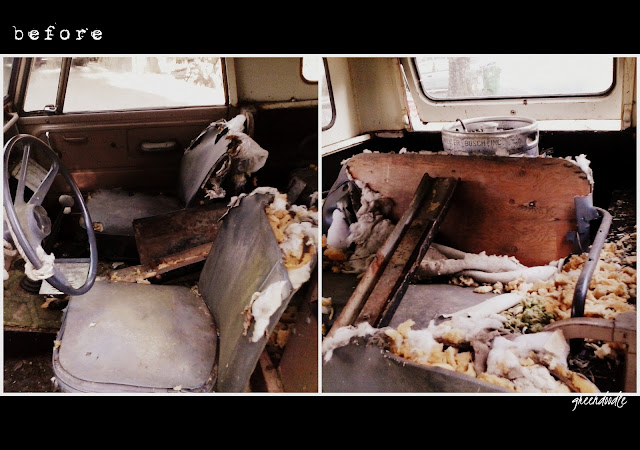 This has got to be the most hair-brained of my projects yet!  There were a few days I was certain that I’d contracted the hantavirus.  Clearly these seats were once a home to varmints of some kind.
This was a serious makeover. 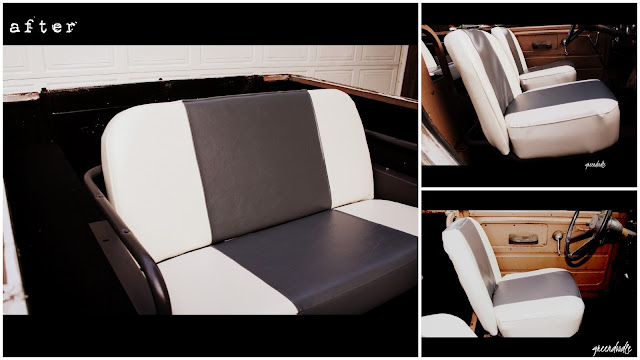 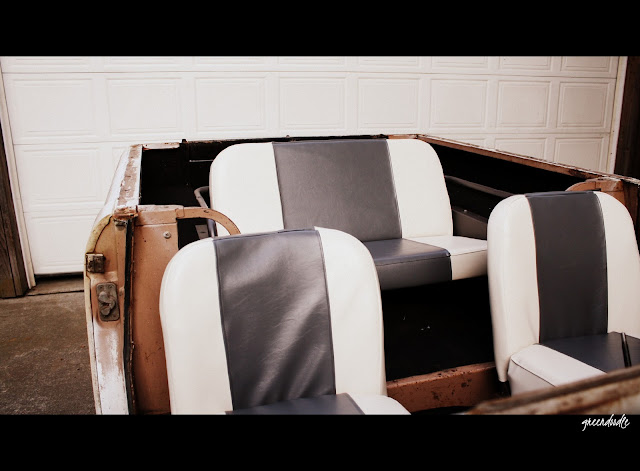 I stripped the seats of our new Craigslist treasure, a 1964 International Scout, down to wood and metal.  Armed with new foam and dacron, I created new two-tone seats covered in marine vinyl.   A bit of new carpet and a painted dash completes the look.
Eventually we’ll paint the thing to get the exterior looking as sharp as the interior. 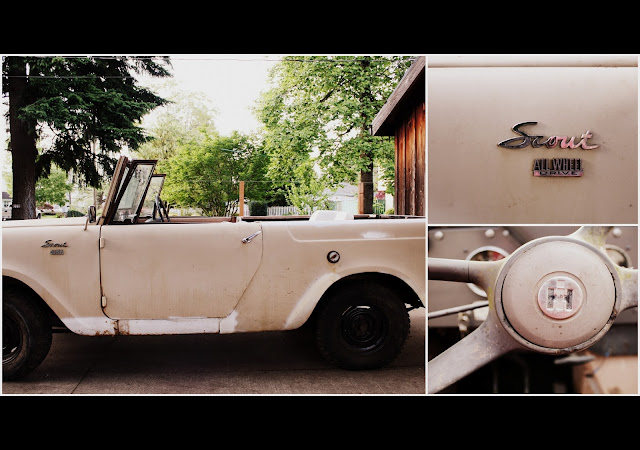 And we now have a fun new toy for late night drive in movies, jeep trails, and picnics in the mountains
(if only we could get the thing running…)

With Memorial Day around the corner, everyone is busy sprucing up their yards for summer. Along with newly planted flowerbeds...