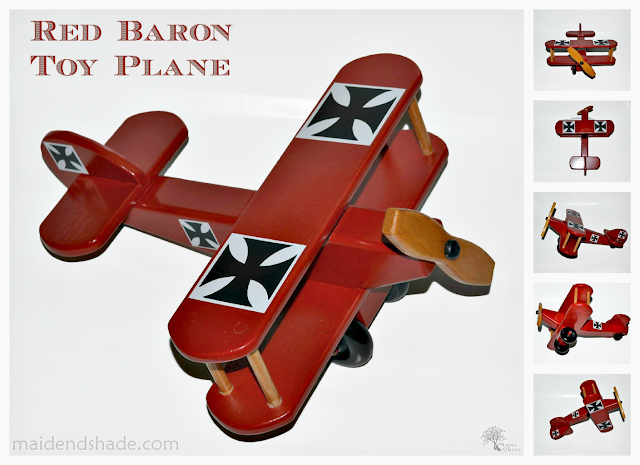 I picked up an old wooden toy plane at a  thrift  store. It was $2. I walked around the store carrying it the entire time, debating on  whether  to buy it or not. I decided not to, and put it back. A day or two later, I went back for it. Not surprisingly it was still there. I mean, it was missing the wheels and it’s rudder. The  propeller  was lose and had some permanent marker on it. And the whole thing was pretty scratched up.

I  removed   most of the old prop axle, but the part that was glued into the plane needed to be bored out. To do that I took a new axle, put the prop on it and when next to the drill bit, I marked how deep the drill needed to go using duct tape. Then I used a power drill to bore it out.

For the rudder, I hand drew a basic rudder shape on paper. I picked up a  piece  of craft wood from Lowe’s and traced the  shape  on it. Because I couldn’t find our jigsaw, I had to use my Dremel Trio. It didn’t make the smoothest cuts, probably because I didn’t have the best bit for the job. But it was late at night so I gave it a try. And after a few different attempts I ended up with one that worked ok. I sanded it down and rounded the edges. It fit real tight in the groove the old plane had for the rudder. Because it was such a tight fit, I didn’t need to glue it. I hammered it in place and it’s not going anywhere.

The replacement front wheels didn’t line up with the old holes. So I took a piece of that craft wood and routered a groove with one of my other Dremels, and then cut it down to size. I glued it on below the the old  wheel  block and let  that dry.

I sanded the  entire  plane down many times. Once I felt it was smooth  enough  and  much  of the varnish was gone, I taped of the struts and the rear “wheel”.

Once everything was dry, it was time to assemble the remaining pieces. I put each wheel on an axle, put some wood glue on the wheel and put the axle in the channeled out section,  making  sure  the wheels still turned. And I glued the prop axle in the same way, also making sure the prop would still turn.

I cut the crosses out of black vinyl and placed them on squares of white vinyl (my inspiration photo is here).

Then applied the vinyl on the plane. For the final touches, I used a Sharpie to color the rear “wheel” and the cockpit. 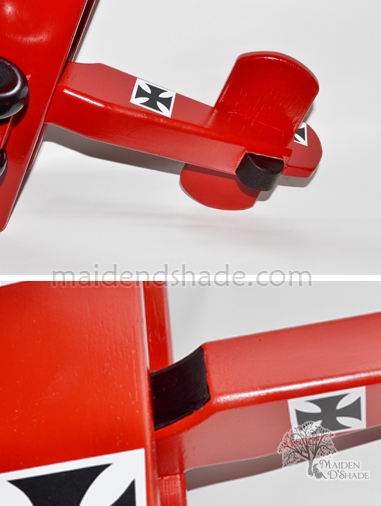 And here’s some before and after shots of the little Red Baron! 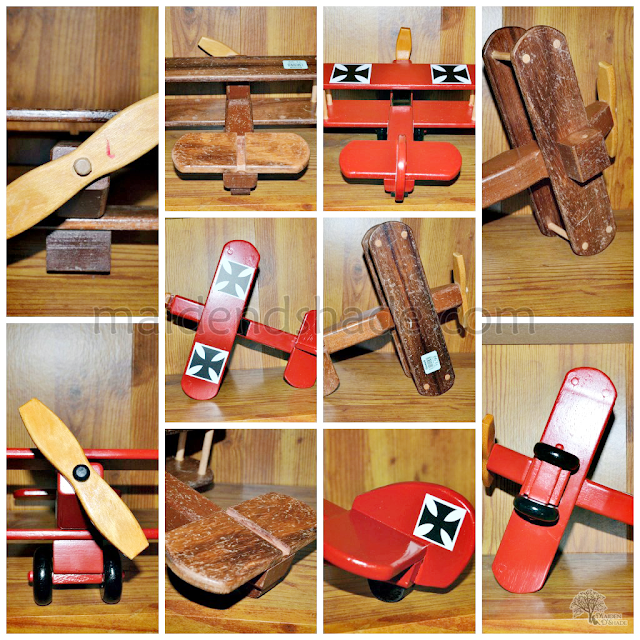 Thank you so much for all of the votes. It was a really fun project and one that any one can do with the right (or close enough to the right) tools.

How was your Valentines weekend?  It's become a sort of tradition for my husband and I to go out bowling...